Due to demand, a new Train the Trainers Summer School will take place in Nottingham in July 2013.

This will be the 8th year of the programme and based on a list of requests, we have invited a third group of international professional singers and musicians to participate in Year 1 of the course.

The two current groups of trainers are now in their 8th and 5th years respectively.

A plenary session will also take place in France during the 2nd week of August, culminating in a gala as in the previous 3 years.  There is a growing interest in the connection between the training courses in the UK and their European association.

The Story Behind Train The Trainers

As VoiceChoice's experience and effectiveness has grown, there has been an increase in the number of professional artists who want to develop their own skills in the way that VoiceChoice's approach allows.

While VoiceChoice continues to train its own leaders, through hands-on experience, we have been actively seeking ways to improve the skills transfer process and offer it to a range of individuals.

VoiceChoice's leaders have first hand experience of working in training institutions all around Europe - most notably The Paris Opera Studio; JVR Opera du Rhin, Strasbourg, Birmingham Conservatoire; Royal Academy of Music, London; The National Opera Studio, London; The Royal Scottish Academy of Music and Drama and English National Opera. It is this experience, in part, that has helped to shape VoiceChoice's own unique approach to learning by doing. 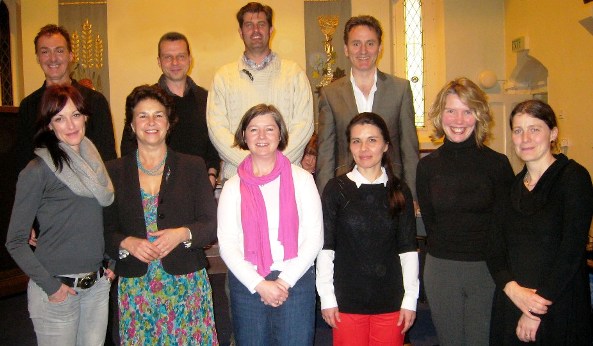 In 2004, VoiceChoice piloted a voice programme in conjunction with the Theatre Royal, Nottingham. This was supervised by the Director and Artist-in-Residence and involved two potential trainers working under supervision and with extensive preparation and follow up support.

In 2007 and 2008, Years 2 and 3 of the programme offered continuing professional development, building on specific achievements of the 1st year's course.

The training has focussed on enabling each individual to identify and develop their own methods of vocal training which has involved work across all aspects - aural, visual, physical, and psychological

The Courses Have Included

Due to demand in August 2009, VoiceChoice undertook a re-run of Year 1 of the 'Train the Trainers' programme for a new group of young teachers.

A new course, partly funded by the Arts Council, "Collaborative Teaching", focussed on more advanced physiology, working with a specialist laryngeal osteopath and identifying vocal problems at early stages. This included participants from other countries in Europe building an international element to the course.